"The programme is in the start-up phase, but I think it is very well thought through", says Emelie Ölander, stemming from Karlstadt in Sweden. Emelie is  bachelor in Earth Science from Stockholms Universitet and among the first ones attending the new programme in Climate Change, Impacts, Mitigation and Adaption (CCIMA). 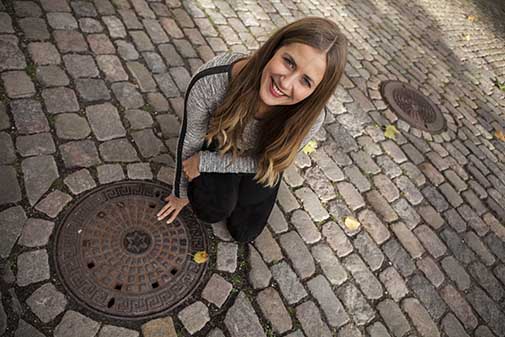 Why did you choose CCIMA?

In fact I didn’t find any master programme in Sweden that I found interesting. My sister said, why don’t you look at University of Copenhagen? So I looked around at the website, and then I found this master programme.

What exactly were you looking for?

I studied Earth Science (Geoscience) in Stockholm, but I lack knowledge in chemistry for instance, and that limits the possibilities a bit. So I was looking for a combination of science and politics. And I think CCIMA has a good interdisciplinary science. I can read the courses and do a good job, even though I lack some of the basic knowledge in chemistry for instance. You can learn it along the way. And as I haven’t studied so much politics, here you can address such subjects as economic impacts and how governments work, and I think that’s crucial as well, when you are working with climate change.

You can choose between a series of courses, can’t you?

And the combination defines what kind of graduate you end up being?

Yes, we have three profiles. You can have a general one if you can’t decide, a natural science profile which is more based in natural subjects, like what is happening to the elements, and then you have the social science profile where you focus more on economics and political views on climate change.

You can pick the main road or branch out in one of two directions?

Yes. And that’s nice. The reason why I started reading Geoscience is that I wanted to know about the processes. If I don’t know the processes, I can’t argue about why climate change is happening, or why environmental issues are important for society. But now when I’m on the master programme it’s quite nice to actually understand the big processes in society too: how the governmental institutions work, the policy making, how they actually address climate change, and how they will work to further adapt or mitigate the climate change.

One of the reasons I started to study science was that I saw that environmental problems would be more severe in the future. It was worrying. I think we humans need to wake up and be responsible for our actions. We can’t just live off the earth, we have to live with it and have a sustainable society. Now I know a lot of the processes, so I can start to specialise more in climate change and learn more about that.

Do you want to go the natural science way?

What do you think of the education so far? It’s brand new and you haven’t been here for so long.

I’m actually quite surprised of the warmth and enthusiasm from our teachers. It feels like they really want us to learn and be the best at what we do, so it feels really nice.

The first courses of this programme are quite broad. The interdisciplinary course ‘Climate Change, Impacts, Mitigation and Adaptation’ addresses all the impacts: economics, water resources, health etc. It’s quite fast going, so it feels like you learn a lot of stuff in different sectors. It’s a bit different from what I’m used to where you usually study for an exam, do the exam or write a project, and then you are finished.

Why is it different?

It’s an online course. Instead of having final exams we are doing weekly discussions. So you get points for a weekly test. But so far I’m enjoying it and it really has helped me a lot. And it’s so nice that we have very different backgrounds – some have studied physics, geophysics or political science. So there’s a lot of input, and that’s really good.

We still have real lectures with professors telling about their work, and seminars where we are addressing problems and discussing how we can actually solve them.

How is the workload?

It’s different from the bachelor. Here you start quite smoothly, but now it starts to build up. They anticipate that you do more than on the bachelor – and that’s how it should be. For this semester it is more group work than individual assignments. And then you have to read too of course.

How many hours a week?

I think I do more than 40 hours – definitely. I had a student job in Stockholm for every other weekend, and I’m so relieved I don’t have to work here, because I feel I don’t have the time. A lot of Danes are studying and working at the same time, they seem to manage, but I think it’s nice to have one day off in the week. But you have an evenly distributed workload over the year.

What do you think of the university and the facilities?

I think it’s really good. You have different libraries and they are quite outspread. It can be good or bad. If you are at Frederiksberg Campus and you need to go to North Campus or the Geohouse, which is in the city, it’s quite long distances. On the other hand it’s nice the libraries are distributed all over Copenhagen, so you don’t have to go so far to find one. The facilities at the libraries are really nice. At Frederiksberg Campus for example, you have free copy prints, and that’s really good for the students.

What do you think of the city?

I love it. Except for London I’ve never loved a city that much as Copenhagen. I like the biking culture. The people actually care here. It seems like the Copenhageners are quite aware of climate changes, and Denmark as a whole do a lot of things for research and adaptation measures. And the people here are really nice and friendly. The main problem here is the Danish …

Haha … no, the Danish language. I’m starting to learn. I’ve applied for a Danish course for Scandinavians, so I can learn it faster.

You come from a foreign country and have to learn to know a lot of new people very fast. How’s the social life going?

We had two weeks introduction for internationals in the end of august, where you had classes on “how to be a Dane” … learning how to get the CPR-number (personal registration number) and bank account etcetera. During these weeks we met each other, we had a round tour of the university, and a treasure hunt with the programme. That was really good because then you get to know somebody. I actually still see some of the students I met at the course. So the international students got to know each other before we started the actual course.

So you were ahead of the Danish students when you started?

Definitely. I think they went like “Oh, they already know each other!” Haha … But the class is really nice and because we are so relatively few, everyone is talking to everyone and we do stuff together all the time. We often have weekly meet-ups  with partying or with international dinners. I’ve never been to a programme where the students has acclimatised so fast. Everyone here is like “Oh, you are new here. Call me if you want to ask something, or …” They are really helpful.

How do you spend your spare time?

I enjoy horseback riding, going to the gym and student activities. And apart from that I’ve had visitors from Sweden almost every weekend. It feels like I have a lot to do all the time. A lot of obligations. But it’s nice.

Is there anything you want to criticise?

My housing situation. The Housing Department at the university hadn’t so much to offer: a room in a residence hall or a collegium. I didn’t apply for that. Since I’m from Sweden, I thought I could easily go here and look for an apartment. But when I started to look at it … uhuh … it’s quite expensive. In Stockholm you can at least get a one room apartment even though you have to pay a lot, but here in Copenhagen it’s really hard. The apartments are quite big and everyone is living together with someone. So my father advised me, that maybe we should think of buying an apartment.

So he lent you the money?

Half-half. I’ve been working since I was 16 years old, and I have been living at home, when I studied bachelor, so I had saved money. It’s a one room apartment with the kitchen a bit separate, so it feels like a real apartment. We paid 720.000 DKK.

But here is one of the things to criticise: as a foreigner I have to live in the apartment all year long. I can’t rent it out because of the law. So it’s quite bad if you want to go away for half a year to study somewhere else. I can still have a room-mate if I want to, but I have to be registered as living there.

So you would have appreciated a little more help in that situation?

Yes. Some in the class stayed in hostels in the beginning, because they hadn’t any place to live, though now they all have places to live. I know a lot of people at the university have trouble finding a place. But I think that’s the way it is in big cities.

What kind of job would you like to end up having?

My main goal? To work at the UN with climate change issues like adaptation - or trying to address what is going to happen and try to educate people. Policy making or campaigns – that’s what I have been seeing myself doing. I would like to work globally.

Would you recommend this education to others?

Definitely. I think people should try it out because it’s a good programme. It’s in the start-up phase, but I think it is very well thought through. There is thought of everything, and the education addresses something that hasn’t been addressed before. We are living in a new world and we have to deal with climate change. So we have to have programmes that deal with it as well. You have some programmes in Australia and maybe one in UK, so it’s crucial that more people are starting to study it.

We have biologists with political knowledge, and politicians with knowledge about science , but we are missing people who talk both languages. I think that is one of the key processes – they don’t talk to each other, and they don’t understand each other, and that’s why we are educated to interconnect these two fields. The scientist view of climate change and the political view.

And Copenhagen is just like a bonus. The bicycle lanes and the whole society of bicycling is amazing. There are bicycles everywhere and I love it.

It isn’t too big it isn’t too small – you can get to know everything and be part of the events happening. It’s nice. It’s a good city. Come and study here!