Read interviews with students from the Master of Science programme (MSc) in Statistics:

“The great thing about statistics is that you deal with quite advanced mathematics, while applying it in a more concrete way,” says Frederik Riis Mikkelsen, who is in the second year of his master’s programme. 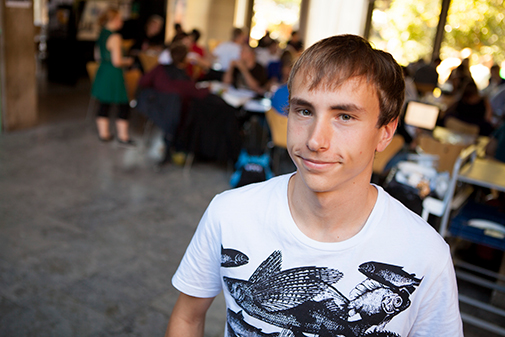 Why did you choose Statistics?

I started directly on the bachelor’s programme in Mathematics without any gap year. I think I chose it because I enjoyed mathematics in upper secondary school. Most other subjects were not as fascinating. But I ultimately just had to choose something. I was in some doubt, but decided to try the bachelor’s programme in pure mathematics, and after that went well, it seemed natural to continue.

You don’t really know what mathematics is when you start your studies. I thought it would be a bit like my classes in upper secondary school – working with numbers and formulas. But mathematics at university level is far more abstract.

Statistics is also quite theoretical here at the University of Copenhagen, but you get the feeling that it can be used for something concrete from the outset. Mathematics can also be applied, of course, but on the Statistics programme you get to work with data, say, from Rigshospitalet, i.e. from the real world – perhaps from testing a drug or a new treatment, and it is up to you to draw a conclusion.

Mathematics is more about asking: Can this result be true? Let’s try to prove it! It’s only afterwards that you consider whether the result fits into a larger context.

What is the best thing about Statistics?

That you deal with something that is quite advanced mathematically, yet also with more concrete applications. Statistics is systematic without being black and white – there are multiple ‘truths’. Your conclusion depends on how you approach the problem. That’s one of the good things about it.

Another cool aspect of statistics is the eye-opening experiences you get. This typically happens when you hear something that goes against your intuition. For example, Simpson’s paradox – which I will try to explain:

This is not in itself a paradox, but they found something very strange if you also took into account the skin colour of the victim. If you have two murder suspects, one of each skin colour, and you don’t know the victims’ skin colour, the accused with pale skin has the highest risk of being handed the death penalty.

On the other hand, if you know the victims’ skin colour, the accused with dark skin colour has the greatest risk of being handed the death penalty.

You wouldn’t expect such a thing to be a possible. That was a real eye-opener, but also a bit gloomy.

I had many ‘gosh’ experiences at the beginning, and I still get them. They show how easily you can get things wrong when working with statistics, so you have to be careful.

Which subjects do you do?

You start off with probability calculations and theory. This is supplemented by basic statistics courses and learning basic concepts and how to get the computer to understand and compute data. Then you learn more advanced methods for more specific purposes, and which models are good for certain things.

You learn to be critical. Many people think statistics are definitive – you can see this in the way the media use them. By choosing your words carefully, you can make almost anything appear true. That’s why it’s good for statisticians to be critical.

The programme is well structured: you have about 15-20 hours of lectures and classes a week, where you start with the basics, and you can already choose a specialisation from the first year.

What specialisations can you choose?

You can work with simulation studies, where you do calculations for certain scenarios.

Advanced regression analysis is another field. This involves finding a good correlation between two variables, e.g. whether there is a correlation between your postcode and the risk of being involved in a traffic accident. And then there is time series analysis, where you observe something like interest rates and see how they change over time.

From an outsider’s perspective it may seem a little dry. Is it?

Yes, perhaps, but I would say that in the end you are creatively challenged. You might have a problematic dataset, for example because of missing or incomplete data. Then you have to feel your way forward and decide how cautious you need to be. When working with data and statistics, you have to constantly read the situation.

Your conclusions will ultimately influence decisions in the real world. I think about this a lot, especially if the data I’m dealing with is disease-related. Then the data represents human beings, and if I’ve been given responsibility for processing the data, wrong handling by me would affect the lives of many people.

This might seem daunting, but it’s good to know that your work may contribute to helping other people.

It’s really good. There’s a positive study mindset, because people are both committed and interested academically, but you also know each other personally. There are plenty of interesting events for students, and the parties are fun.

There’s also our study bar, ‘Cafeen?’, which I use from time to time. When I started studying mathematics, the tutors made sure that we got off to a good start with our studies, without forcing everybody to be together all the time. In the beginning, you are very much ‘on your toes’, but over time I have become more positive and relaxed.

Would you recommend the programme to others?

Absolutely. If you feel that working with numbers is fun, I can recommend it. There’s a good study environment and you learn a lot of different things. I threw myself into it, and ended up really enjoying it. I have no regrets.

Interview with Jon from Iceland, MSc in Statistics: 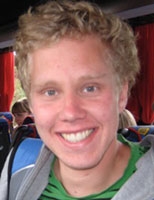 I lived in Copenhagen for three months and really enjoyed the relaxed atmosphere the city has to offer. This was when I decided that I wanted to move to Copenhagen when I finished my Bachelors degree.

The range of courses available, both theoretical and applied, and the level of teaching is also surprisingly good. My fellow students have also been helpful and nice to me so I cannot complain about anything.

Copenhagen is a great city to study in. The first thing that you notice is the number of bikes you see in the streets. I almost always use my bike when I have to travel and in addition to being a quick and a efficient way of travelling it is also pleasant exercise. Copenhagen also has a lot to offer apart from a good student environment; there are a lot of nice coffee shops and kebab places all around town and there are surprisingly many concerts held in the city.

My favourite thing about Copenhagen is definitely the number of public gardens, and there is not a lot that compares to sitting in a public park in good weather with friends and beer. In general Danes are nice and helpful people. I would definitely recommend the statistic department at University of Copenhagen to other students and there are probably not a lot of places that are better than Copenhagen to experience new things, learn a new language and meet a new culture. I have recently graduated from the masters program at University of Copenhagen. I have been accepted on a PhD program in the USA.